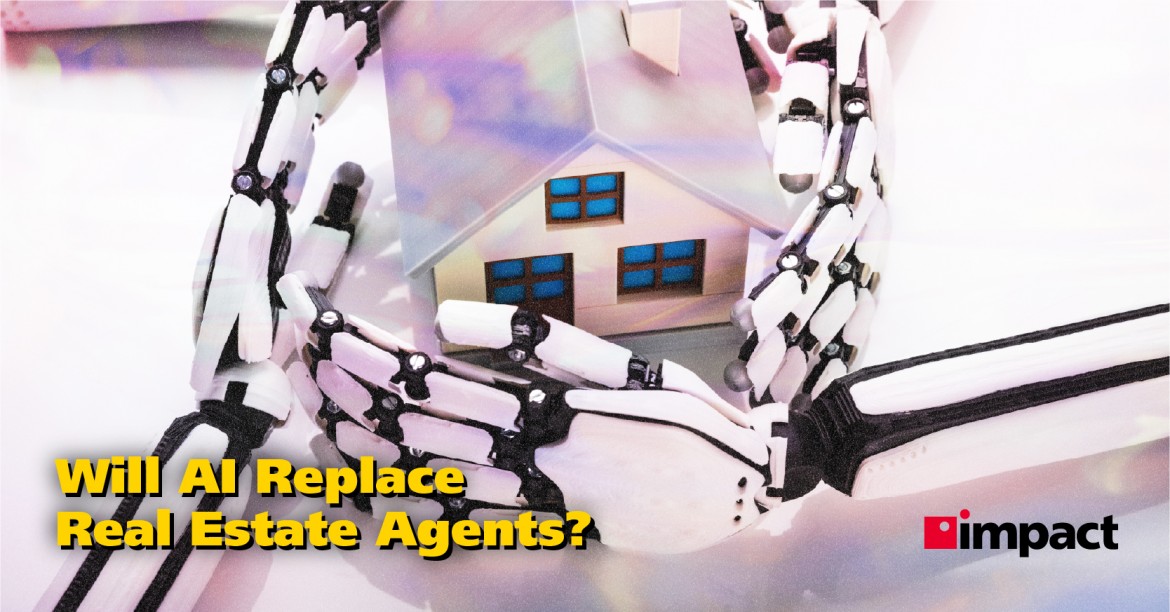 Those in the real estate business will be aware of the disruptive effect that digital technology—AI in particular—is having on the industry, but will AI replace real estate agents completely?

This is a conversation that will not come as much of a surprise to many people, as it’s the same conversation we’ve been having for years, if not decades.

The real estate industry is rather uniquely positioned when it comes to this question, not least because a wide variety of new technologies have changed the landscape.

Much of this has been driven by new trends in the industry, particularly with regards to the role of estate agents—augmented reality is a typical example of how tech has usurped some aspects of their job.

Today, we’re going to be taking a look at the role of AI in real estate and whether estate agents should be concerned or emboldened by its increasing prominence in the industry.

Advancements in the uses and affordability of technology implementation in real estate has driven tech adoption among businesses more than ever—though still lagging in many instances; more on that later.

This has meant that investment into new tech by real estate companies has risen, particularly over the last 10 years.

PropTech, which to a large extent is the driver behind investment into real estate tech, has seen a large increase with regards to growth.

PropTech involves the use of technology to change the way realtors do business by introducing new digital ways to disrupt the market.

A common example of this would be the emerging iBuyer model, where algorithms are used to buy and sell properties in a matter of days—allowing homeowners to circumvent realtors altogether.

This is one of the more extreme examples of how PropTech is changing the landscape. The market for PropTech has expanded enormously in just the last few years.

Last year, investment in PropTech was $14 billion in the first half of the year. By comparison, that’s more than the entirety of 2017 ($12.7 billion).

AI is just one of the technologies involved in the PropTech boom, and as such retains a central position in the future of real estate.

By the end of 2020, it is expected that at least 30% of real estate companies will be using AI in their work processes.

Adoption at present is significant, but not pervasive. AI as a business tool is being realized, but it’s likely that its most popular days are in the future.

Uses of AI in Real Estate

AI has a number of uses for a modern real estate business—not least because automation tech is useful for trawling large data sets that have become so commonplace in organizations across every industry.

Chatbots are used more frequently than ever by real estate agents, primarily because they can bring in leads more effectively than humans.

Chatbots are used by 28% of all realtors, and real estate businesses profit more from chatbot use than any other industry.

Nurturing leads from the moment they visit your website is of primary importance to eventually turning that lead into a sale.

A lot has changed since chatbots first became a common sight for website visitors; most notably consumer attitudes to them.

As they’ve become more commonplace over the years, people have grown to recognize their use and, even more significantly, take a preference to them over humans.

Processing data in a modern company is an integral and unavoidable aspect of business operations.

It’s more and more the case that organizations who can process data quickly and efficiently tend to outperform their peers who lack digital maturity.

Put simply, the faster customer data can be processed, the happier they’ll be.

As this relates to real estate agencies; there is of course no shortage of the amount of customer information that has to be handled on a daily basis.

Whether its applications, queries, or personal identification information; there’s an endless stream of data that has to be processed—much of it unstructured and sensitive to handle. Workers have to process this data every day, often spending large amounts of time doing so and the net benefit not being all that positive.

AI can be used to streamline these processes, by automating document workflows and digitizing them to create a more secure and reliable way of dealing with data.

A recent report by the Altus Group states that while 75% of commercial real estate executives believe automation will eliminate jobs, 71% of respondents believe it will introduce new roles to the industry—in particular, roles that revolve around greater value-added tasks.

Having employees manually perform tasks that are easily automatable is an inefficient way of running operations.

The question many business owners today find themselves asking is why are they paying a human to perform a task like data entry when an AI bot can do the job in a tenth of the time?

67% of decision makers said implementing digital or software solutions would be important to remain competitive.

In addition to the time saved by using AI in manual processes, there is the added value that is reaped from improving the efficiency of your processes—and consequently the organization’s overall productivity.

A study found that 22% of an employee’s time is spent on repetitive tasks. Over the course of a year, imagine how much money is wasted by workers spending time on manual tasks that can be automated.

Adoption of AI By Realtors

While AI has had a dramatic effect on the real estate industry as a whole, it’s important to note that many businesses are still not quite there yet in terms of adoption.

KPMG’s 2018 Global PropTech Survey found that 66% of real estate decision-makers say they have not implemented a digital and technological innovation vision or strategy at their firms.

As with most industries, there’s frontrunners who are ahead in implementing tech, and those who are lagging behind.

As far as the real estate industry as a whole goes, there’s a definite case to be made that companies are being slow to adapt, much like organizations in other industries.

Technology implementation in real estate is, however, clearly on an upward trend.

For example, 8 out of 10 commercial real estate businesses now employ a Chief Data Officer to oversee the organization of their data strategy and governance—a large increase from four years ago, when 44% of companies lacked such a role.

Of course, the question that we have to answer is whether AI will replace real estate agents.

So far, trends within the industry would indicate that this is not the case. Technology like chatbots, which are regularly thought of as “replacements” for human workers, have been adopted by only a minority of agencies so far.

For those who are concerned about the effects on human workers that AI will have, it’s important to note that AI won’t be taking away people’s jobs as much as it will allow them to work on other tasks that are better suited to human intervention.

Most of the tech adoption as far as real estate goes is aimed towards improving operational processes because they can’t help in areas where humans excel. Selling a house is a very personal experience for the buyer, and the likelihood AI replacing estate agents altogether is low.

Know that you need digital solutions but don’t know where to start? Don’t worry, you’re not alone; digital transformation is complex. To find out more about business cloud technology and which solutions are right for keeping your business competitive and in good shape for the future, download our eBook, “Which Cloud Option Is Right For Your Business?”